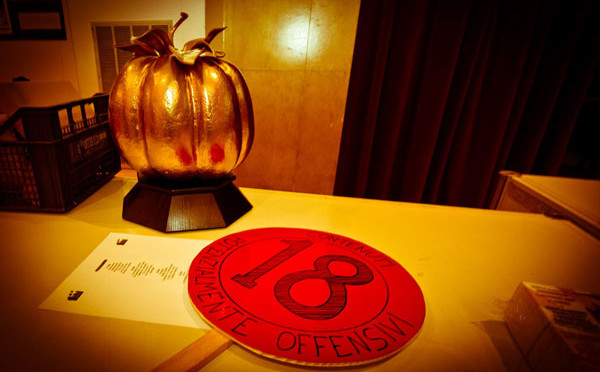 Bravo Ma Basta Film Festival (in English literally “Bravo but that’s enough Film Festival”) was created to give space and visibility to homemade B-MOVIES, made by authors without large budgets who heavily rely on their great passion for cinema combined with a large dose of self-irony. Films that typically are penalized by their poor means (but not of expression) in the numerous Italian and foreign festivals.
The BMB is not, however, the refugium peccatorum of films discarded from other festivals, nor the mental masturbation fair. It’s not even an event where award winning short films made with astronomical budgets come and easily make a clean sweep: at BMB they will find aggressive competitors in movies made with a few Euros and a lot of creativity.
The BMB is “where genius makes up for the lack of means”. We are not disgusted by big-budget movies, it is the value / means that matters: from a movie with a ten thousand euro budget (!) we expect at least a battle scene between aliens and mutants. In addition, for us it is important the ability to amaze and entertain the public: the depth of the characters, the subtleties and the inspired dialogues are completely unnecessary, if the film is soporific.

The BMB is above all a celebration, an opportunity for authors to meet and discuss freely. So, regardless of the selected films and their results we hope to find the location of ​​the Festival once again full of fun and interesting people.

We still recommend to all who wish to participate, both novice and veteran filmmakers, to read the Survival Guide to BMB published on the site.

From its third edition BMBFF hosted the exhibition Comics You Should Know. The event was highly appreciated and we will expand the space dedicated to the authors of trash and underground comics.
We invite all self-produced comics authors to send their works, selected authors’ works will be exhibited in the location where the Festival will take place for the entire duration of the event and published on our website. In addition, each of them will be reviewed by Andrea Plazzi (one of the most eminent comic experts in Italy).