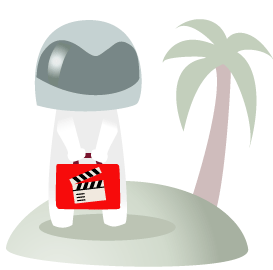 Novice filmmakers (but also veterans) often commit avoidable mistakes that end up penalizing their works. Making a film, the thing that we must constantly ask ourselves is:
Am I entertaining my audience ?

Hitchcock argued that the spectator, sitting in an armchair in the darkness of the room, is in the best position to fall asleep. The difficulty being a director lies in keeping him awake. Here is some wise counsel to curry public without too much effort.

a) Editing makes sense. If you have a professional editing software or if you roll the film all in a row with a camera, you have to give a certain rhythm to the story. Often directors are so in love with their shots to want them to last forever, but the audience rarely appreciates. Sometimes you have to leave some piece of you heart on the editing room floor, refusing to show in real time the protagonist who gets up, goes to the bathroom, shaves, dresses, eats breakfast , take the house keys, leaves, etc. – if it is not directly used for the advancement of the plot, you can usually throw it away. Also: there are stories that can be told in five minutes, why make them last two hours? In cinematography it is better short that fills than long that rinses, to use a vernacular but effective expression. Minutes are centuries in a movie.

b) Audio and video quality should not necessarily be exalted to power, but at least enough to understand what is happening on the screen. In particular, often with live audio, the outdoors background noises or the camera too far away from the subjects makes the dialogue unintelligible. Even music can be an issue, if volume is too high to cover the characters’ words. A film with low-quality audio or video can be just as unpleasant. If the audience has to make the effort to sharpen ears or eyes is already hating you.

c) Non-professional actors often do not know how to act properly, they speak with incorrect diction and forget the lines, so they should be used for their skills and looks. On the other hand they possess a natural empathy, often superior to that of the professionals, to exploit. It is useless to push a too young actress to humiliate herself by reciting the agony of a mother in front of her son’s grave, when the result is ridiculous unless you want to make people laugh (or pity you).

d) Here at BMB nobody cares about personal mental masturbations of Authors, it is painful and cruel but true. The strapallosi film authors who may have felt offended by this revelation can stop reading this manual and send their works to the Milano Film Festival, or one of the other thousand festivals able to appreciate them – not us, thank you.

s) Avoid too complex plots and movies with too many characters: clarity is the key. If the audience begins to wonder: “Who was that guy?” “Where are they going?” “What happened?” it already is in the antechamber of the REM stage.

f) Even for newbies a minimum of directorial technique is essential: if there is a field in which the eye really wants its part it is cinema. There are thousands of manuals that explain the basics: what is the field jump and how to avoid it, how to use the shots, what’s the difference between a foreground and a long shot, all of which help to make a good movie, pleasing and understandable and that are learned in a short time. The cut and the composition of the shots deserve a little attention, because are cheap in terms of cost and time, but make  your work attractive and expressive. The hand-held camera is a beautiful thing, but sometimes you need a tripod. Can’t you feel a little headache watching The Blair Witch Project? Often cameras / camera / mobile machines are equipped with features such as automatic focus, automatic aperture and exposure, but in extreme conditions (low light, moving car, sudden changes in lighting) these automatic devices tend to do just crap: focus that comes and goes, mad diaphragm. It is better to learn how to use the manual controls – where possible.  It is best to avoid using zoom and digital stabilizers (which reduce the quality of the image) in favor of zoom and optical stabilizers.